For Want of P-Values…

Initially, my topic of choice was lesion network mapping (LNM), which utilizes human connectome data to identify functional brain networks associated with neurological and psychiatric conditions that are caused by lesions, as I have previously applied the technique in a research project. I planned to extract p-values from the ten most recent studies which used LNM network “connectivity” or “disconnection” (as defined by the original authors) to predict behavioral outcomes, create a p-curve from the p-values, and test for the evidential value of the studies through right-skewness tests of the p-curve.

After pre-registering my meta-analysis (link: https://doi.org/10.17605/OSF.IO/HY6F7) and spending approximately two-thirds of a weekend searching for studies, I realized that finding ten studies that fit my selection criteria was likely not realistic within my time constraints. LNM is a fairly new technique, first appearing in the literature about seven years ago in the seminal Boes et al. (2015) publication. Many LNM studies, particularly the earlier ones, mainly reported qualitative findings about the anatomical locations of functional connectivity networks disrupted by brain lesions associated with specific conditions rather than quantitative predictions of behavioral metrics, and several studies that did report statistical results relevant to my analysis included statistical parameters which (to my knowledge) do not necessarily produce p-values with uniform null distributions. All three factors likely contributed to the paucity of studies that fit my selection criteria.

I restarted with a new topic: moral injury. Morality, especially when examined through a neuropsychological lens, is fascinating to me. The concept of moral injury, loosely defined as psychological harm caused by experiencing events that violate deeply-held moral principles, affirms one of my own personal intuitions (which, according to Prentice et al. (2018), is often assumed but rarely directly, empirically tested) about human morality: the majority of people have a fundamental psychological need to view themselves as morally good. To indirectly examine this intuition and address the lack of focus on civilian populations in moral injury research, I decided to test the evidential value of studies examining associations between moral injury and mental health metrics in civilian groups and pre-registered my meta-analysis (link: https://doi.org/10.17605/OSF.IO/KTJ4C). Based on my intuition, I hypothesized that the studies would demonstrate evidential value, which would be supported by statistically significant (p < 0.05) right-skewness tests for both the full and half p-curves.

Rather than conducting my own search of a scientific database for studies, I started with an initial pool of eleven studies, which were drawn from the studies included in the Williamson et al. (2018) and the McEwen et al. (2021) meta-analyses on moral injury and mental health. The two meta-analyses collectively included over seventy studies in total, but the overwhelming majority examined military groups rather than civilians and were excluded. I defined further exclusion criteria, detailed below, to ensure that I did not violate the assumptions of p-curve analyses.

Extracting the appropriate p-values was far messier and involved much more subjective judgement than I consider ideal. Most of the included studies made their hypotheses clear, and I did specify in my pre-registration that I would select the first (in terms of reference in the study text) statistically significant p-value and test statistic in the event that a study reported multiple “relevant” statistical results. However, I rather loosely defined “relevant” in my pre-registration.

Ultimately, I did my best to follow the process* below when selecting p-values:

*(Note: This was not stated in my pre-registration as I did not anticipate having to define a full procedure for extracting p-values and test statistics.)

I created a study disclosure table** (link: https://docs.google.com/document/d/169wyz1GbZpOD1mkQDVoP7lyoZhXVv–MuPL3yJTElZE/edit?usp=sharing) to summarize and organize all of the information I extracted. Screenshots of the table are below: 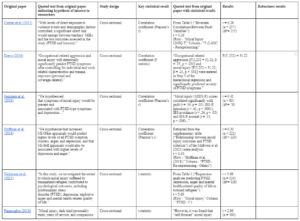 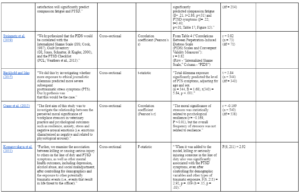 I utilized an online p-curve calculator (version 4.06, link: http://www.p-curve.com/app4/), which is implemented based upon the methodology first detailed in Simonsohn et al. (2014), to conduct the p-curve analyses.***

Pictures of the outputted p-curve and table with right-skewness test results are below: 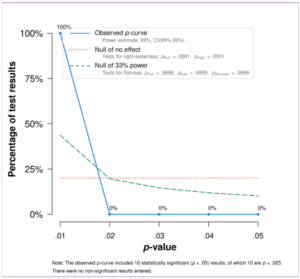 The results of the p-curve analysis support my hypothesis. Both the full and half p-curve were found to be statistically significantly right-skewed (p < 0.0001 for both continuous tests), suggesting that the studies do contain evidential value and that the associations between moral injury and mental health metrics is a real effect. 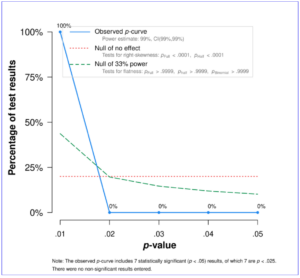 The results of p-curve analyses on the McEwen et al. (2021) subset of studies are similar to those on the full set of studies. Both the full and half p-curves were found to be statistically significantly right-skewed (p < 0.0001 for both continuous tests), providing support for the evidential value of the subset of studies.

***(Note: The exact input used for both p-curve analyses can be found at this link: https://docs.google.com/document/d/1vAFZvSMSYI-230YU_sGBoBknBccFmc6myU1pRlHkuOY/edit?usp=sharing.)

The results of the p-curve analyses also indirectly support my intuition about human morality. If my intuition is correct, and most humans do have a psychological need to perceive themselves as morally good, then undergoing moral injury would be expected to lead to detrimental mental health outcomes–which is what the results suggest. While I am quite relieved that I do not need to uproot one of my fundamental beliefs about human nature (and somewhat ego-stroked from receiving empirical support for my intuition), I also recognize that having my intuitions supported may lead to unconscious biases.

As I have observed in every other scientific research discipline that I have been exposed to, p-curving involves far more subjective judgement than I initially expected. Though I made those judgements before I even generated the results and had no intention of swaying the results with my judgements, I cannot rule out the possibility that I am less likely to examine the soundness of my judgements quite as critically as if the results had challenged my intuitions. Biases, after all, are significant contributors to the very need for meta-analyses and meta-statistics.

Papazoglou, K. (2018). The examination of different pathways leading towards police traumatization: Exploring the role of moral injury and personality in police compassion fatigue. Dissertation Abstracts International: Section B: The Sciences and Engineering, 79(3-B(E)).

No comments to show.